Judging by the look of the September calendar, it’s going to be a busy month with mass market, eBook and trade paperback releases for 3 different titles!

SEPTEMBER 2 – I’ll head right from Labor Day on Sept 1st, to the mass market paperback release of my USA Today bestseller ONE NIGHT WITH A COWBOY. Keep your eye out for it on a store shelf near you.

SEPTEMBER 16 – It feels like a long wait since NIGHT WITH A SEAL (Hot SEALs #1) released in July, but SAVED BY A SEAL (Hot SEALs #2) is almost here. If all goes well, fingers crossed, I’ll have the trade paperback and the eBook out on the same day.

SEPTEMBER 30 – Yes! CHAMPION, the next Studs in Spurs novel, will be out in eBook the end of this month! 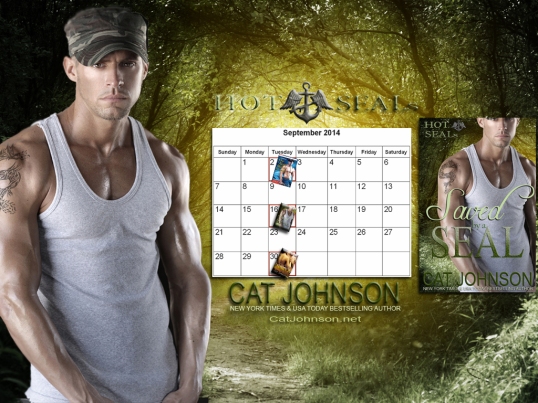 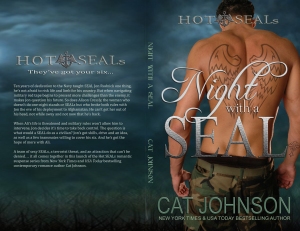 You read that right, an actual PAPERBACK! *Gasp*

I took the plunge, and took two days to make it happen, but I finally got Night with a SEAL formatted to my satisfaction for print. I was motivated to get it done because I want to take a few copies with me to the Authors After Dark Convention in August in Charlotte, NC (registration is still open for attendees for that, fyi).

The good news is that since the paperback is being sold through Amazon, my hope is that it will be available for purchase at all of the international Amazon sites. It’s already up on the US (and eligible for Prime shipping), Germany, Italy , France , Spain, and the UK , so fingers crossed it goes to the other sites as well. It is also available on Createspace .

But WAIT! It’s not out in eBook yet but it’s out in paperback? Yeah, it is and I’m hanging my head in newbie shame… I was going to release the Night with a SEAL paperback on July 22nd, the same day that the eBook will debut in the the Hot Alpha SEALs Megaset (on PREORDER now for 99 cents). Little did I know, in my inexperience with print, that when I approved the proof so I could order my copies for AAD, that would automatically list the paperback for retail sale on Amazon. They don’t mess around over there so SURPRISE guess what’s available 2 weeks early. Just in time for vacation season too, in case you need a “real book” that’s safe for the beach or the pool or the boat where eReaders fear to tread.

It’s just the paperback that’s up early. The eBook of Night with a SEAL will still be exclusive to the Hot Alpha SEALs 12 novella megaset until late August when I plan to release it as an individual eBook on all the usual retail sites (IE: BN, Smashwords, Kobo, ARe, iBooks, and Amazon).